Design by Research, a case study with ‘linear folded stripes’

During the DesignCourse E3, entitled „Design by Research“ at the Institute of Design / unit Structure and Design, students from the University of Innsbruck developed a Pavilion that was prefabricated in Tirol / Austria and then built up in Caudiès-de-Fenouillèdes by these students. In this project the students had to face additional constraints to the usual emphasis of a design project. The key aspect was to use the technique of the “linear folded stripe” to create an object with structural and spatial qualities. 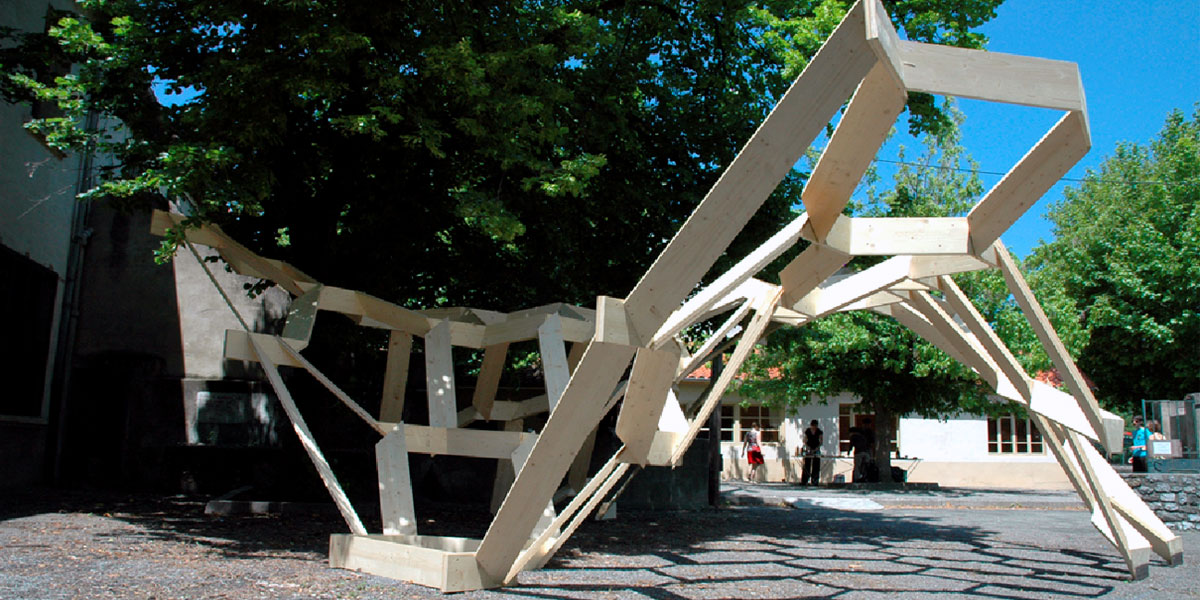 Rupert Maleczek from the institute of design / institute of structure and design (koge), was invited from the CAUE – Pyrenees orientales, to create a temporary spatial object for the conference Negamat that should represent a contemporary alternative to classic wood constructions. This pavilion should not only be an inspiration for spatial, technological and constructive composition, but should also point out where actual research could lead to. The students developed different spatial and constructive compositions based on the research of linear folded parallel stripes. 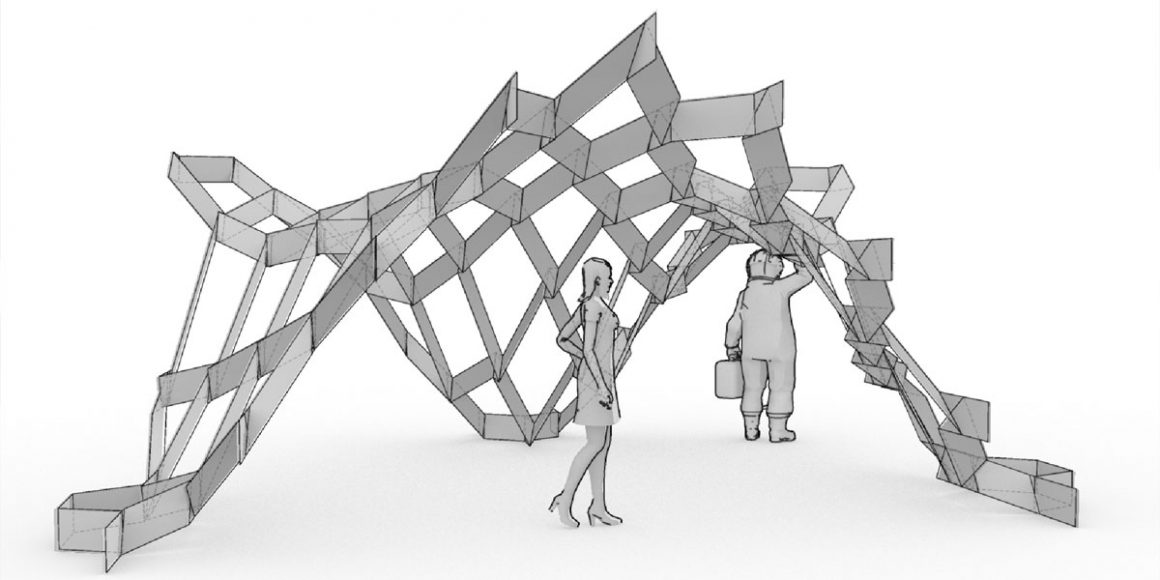 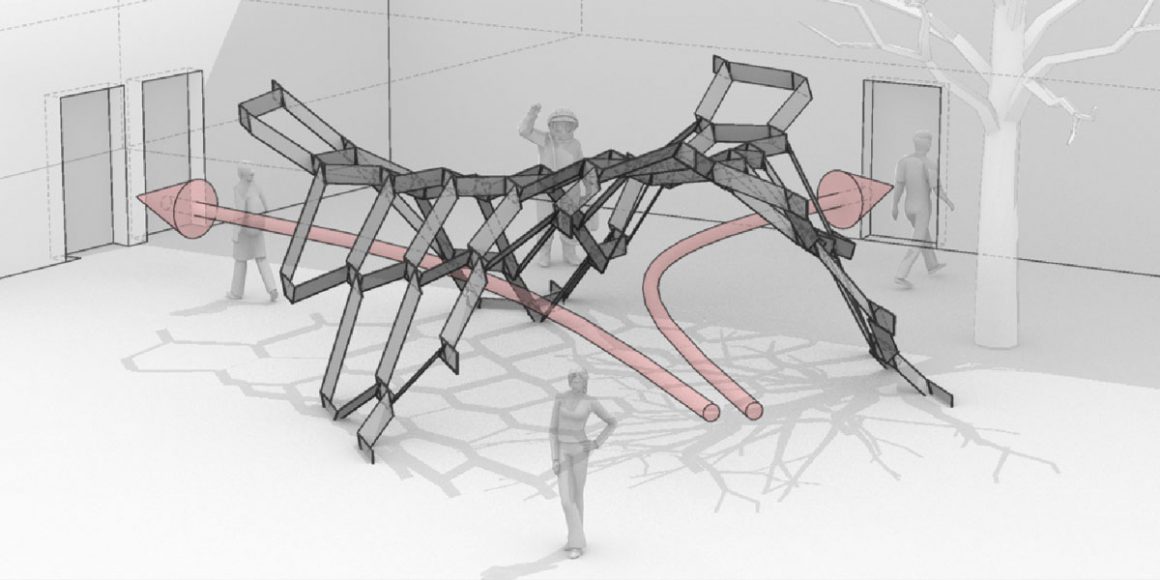 The biggest task was to find a balance between spatial functions, the amount of required wood needed and the structural behaviour. Small architectural objects structuralised with folded stripes tend to change their spatial and structural behaviours enormously by varying the number of stripes or cells. The combination of Karamba and a Component that enabled the geometrical approximation with one special stripe system allowed a real time exploration of spatial and structural behaviours in Rhino. With this combination of tools the students could explore and optimise an enormous number of variations and were able to make reasonable design proposals for the pavilion.

Geometrically the irregular reticular honeycomb-like structure consists of 15 stripes that create 42 closed hexagonal cells. Once unrolled the stripes are up to 12 meters long and have a depth of 20 centimetres. Each stripe has 14 folds, that enable a rotation of the neighbouring segment. These rotations enable spatial composition towards a reticular structure. 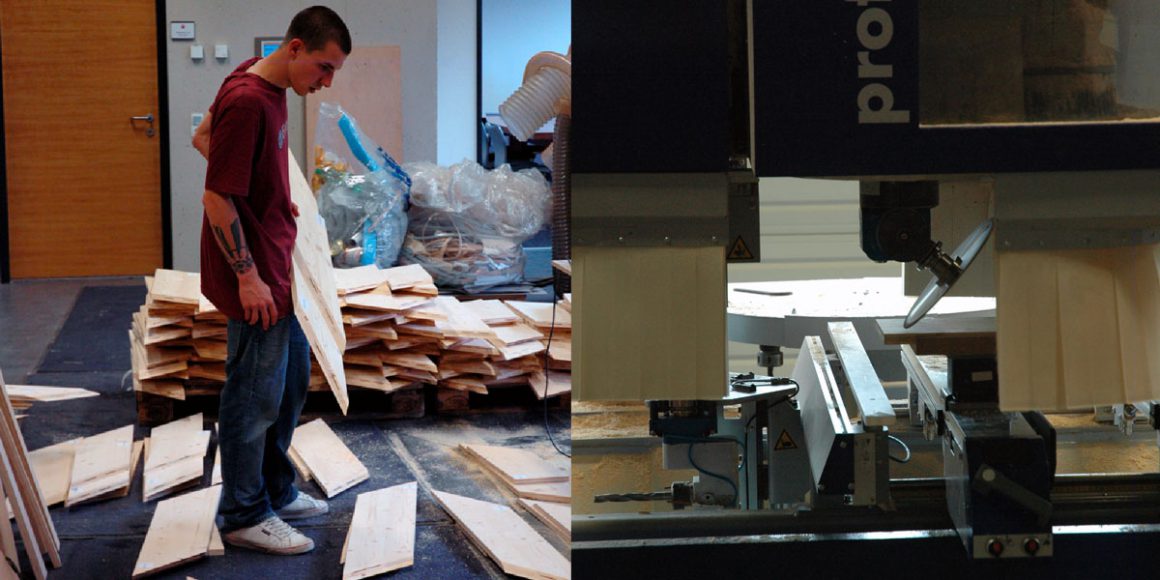 The necessary cuts could be made in the showroom on a Format4 CNC machine within 3 days thanks to the support of the company Felder. After a short introduction on the machine and some testing, on the handling with stripes, the students were able to use the machine, and therefore to coordinate the production process without any further help. 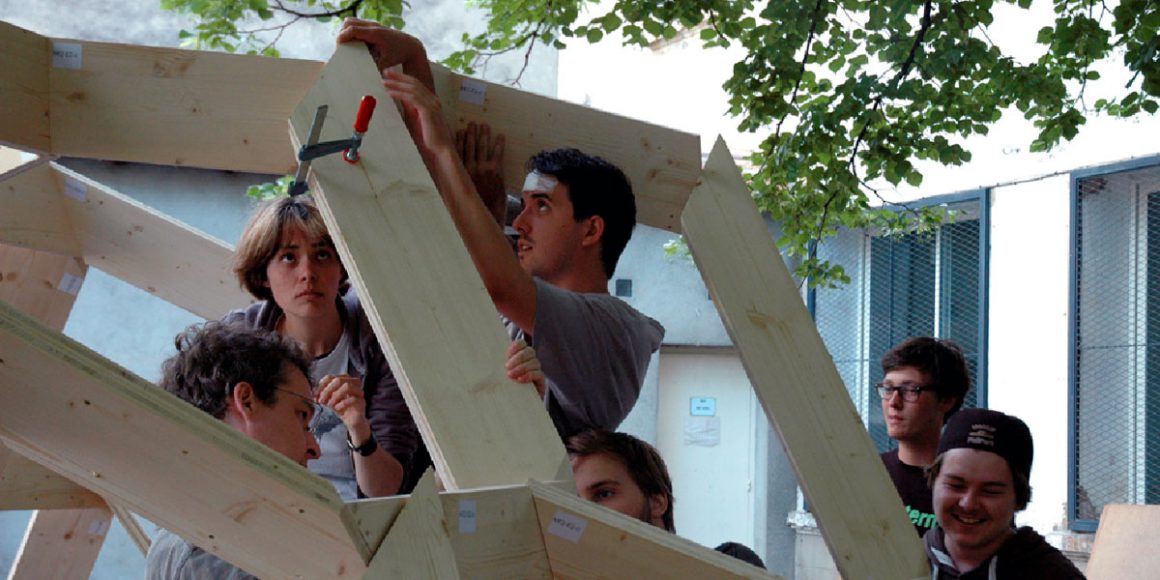 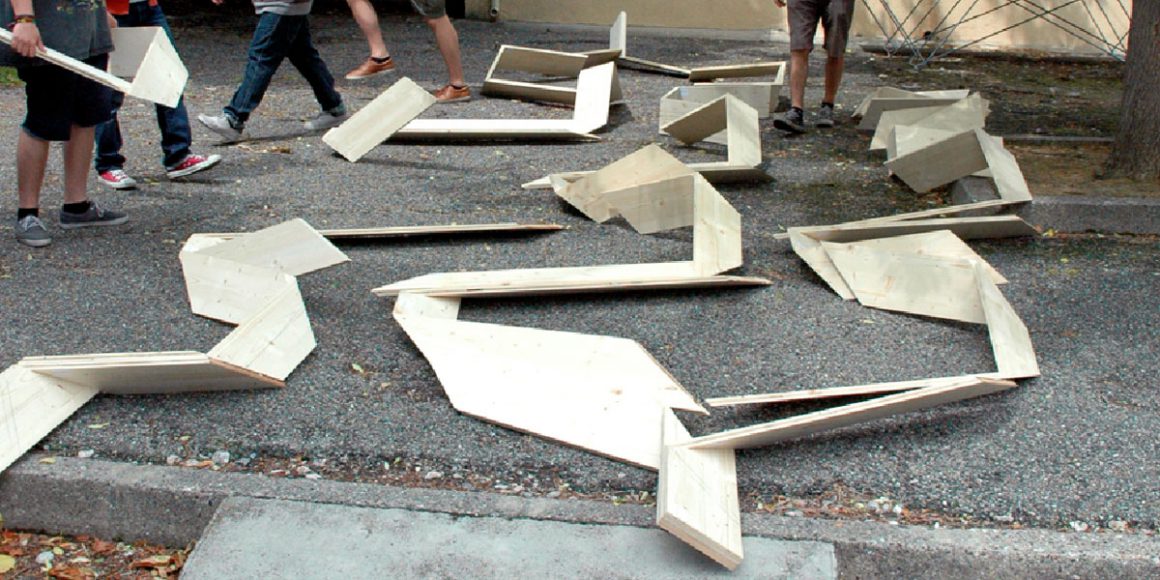 The mitre-joints were connected with the “Lamello” system. In order to provide the possibility of a disassembly, rebuildability, the joints were assembled to segments of three. The size and form of theses segments were ideal to be manipulated from one person. Even if planned from the beginning, the segments were not unscrewed for the transport from Innsbruck to France, but the C-shaped segments were transported. 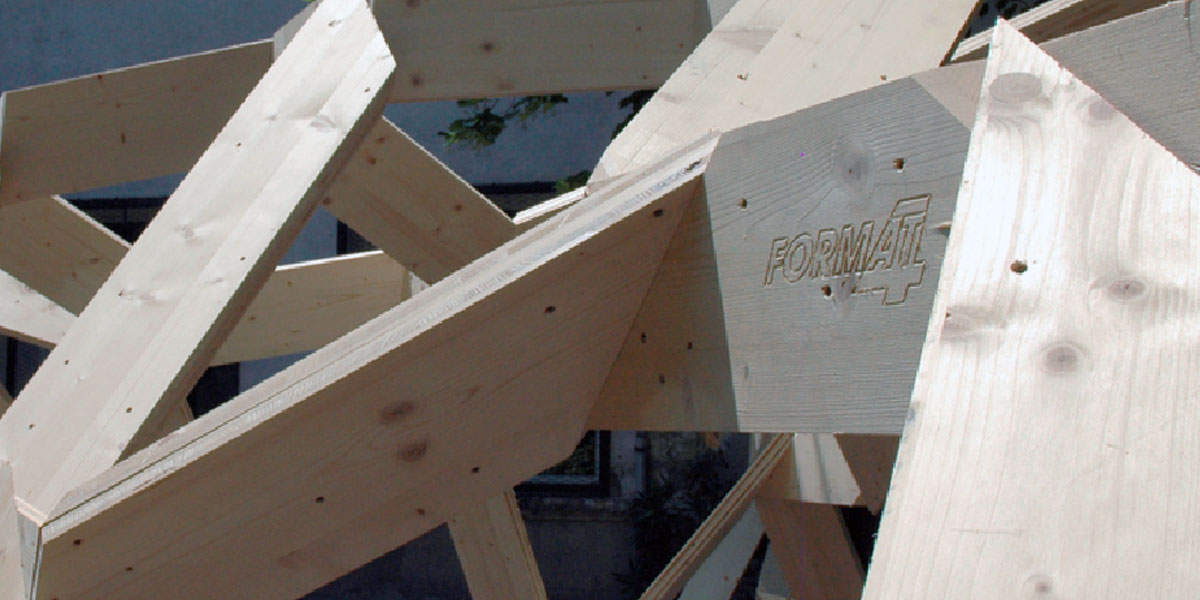 To have control over the production process and to see if the elements were properly produced, the structure was built up once in Innsbruck. Due to the students’ great care and attention during production, all parts fitted perfectly together. This was the moment when a gluing free solution was decided, based on the fact that the screwed mitre joints seemed to be stable enough.The building process can be described as a ‘growing’ assembly of the C-shaped elements. Starting from the foundation points, in the first step the arch of the main entrance was built up. In the second step, this arch was connected to the second foundation point. In the last step the two cantilever parts were added. 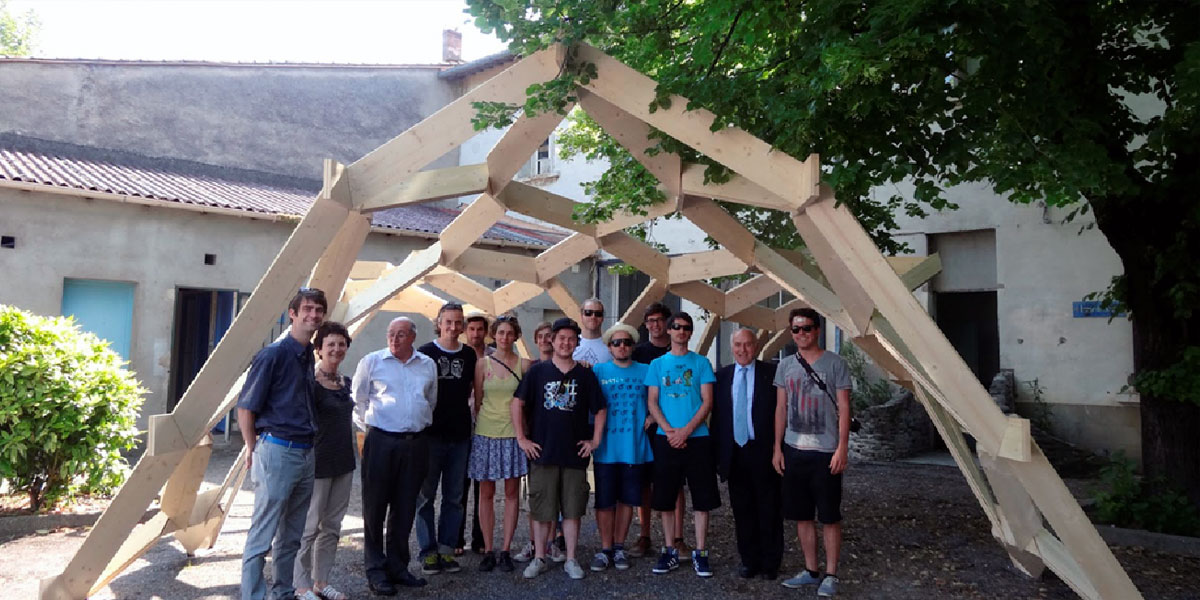 Location: Institute for Design / Structure and Design, University of Innsbruck

Structural Optimisation Workshop, Detmold Eigenforms : Justin Diles
We use cookies to ensure that we give you the best experience on our website. If you continue to use this site we will assume that you are happy with it.OkPrivacy policy