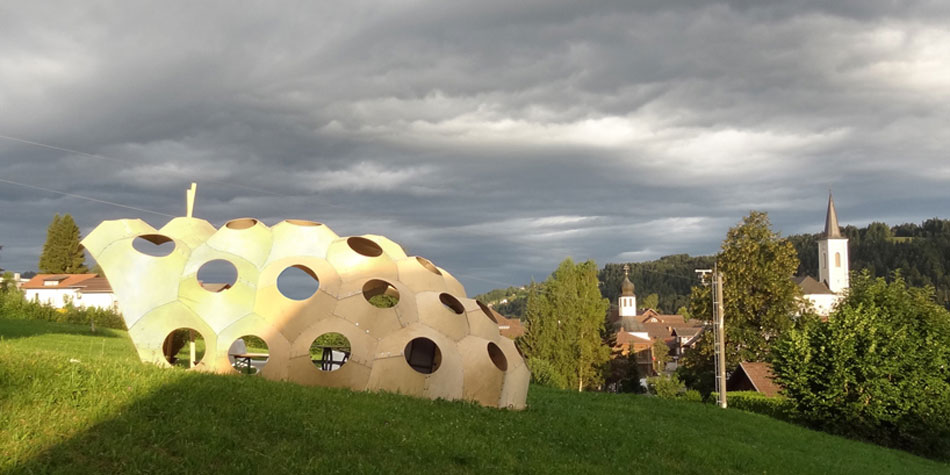 The “Pavilion for one Summer” was designed by Manuel Fabian Hartmann and his team attending the subject “design and construction” at the university of Innsbruck in the summer term 2013. The aim was to build a temporary lightweight pavilion made of wood – for just one summer – which costs less than 1500 Euros. It was also important to realize the complete structure by hand without the use ofcnc or robotic techniques. The place of location for the pavilion is a hillside situation in the center of Alberschwende in Vorarlberg, Austria.

As a first step in the designing process several parameters were defined: the general functions of the pavilion, the specific space requirement, the contextual alignment to the  beautiful view of Alberschwende and the visibility of the pavilion. An important additional fact to be regarded in the design process were the strong wind gusts that occur at the building site.

Design Process
In the next step the form finding tool “SMART form ” was used, which was made available by Al Fisher from Buro Happold. By use of this application we generated several types of hanging forms, each under the consideration of the above mentioned parameters. These resulting hanging forms were the basis for different pavilion designs.

Structural Investigation
The structural behavior of these models were investigated and optimized iteratively with the program “Karamba” under the advice of Clemens Preisinger. The final shape  of the pavilion is a compromise between the defined parameters, the design of the form and its  structural behavior. So only in some areas, the shape is still a purely compression-only-structure (inverse of the slopes form).

After form finding it was the aim to approximately realize the pavilion by an assemblation of several elements. These elements should not be flat elements as used for example by realizing a double curved surface by tessellation. The double-curved shape should be realized by an approximation with several simply curved shapes as D-Forms.

Based on the research of the so-called D-Forms or simple curved surfaces, 30 D -Forms were arranged in a voronoi-pattern on the generated form. By intersecting these forms with each other and the main form, the corresponding structure was developed.

The final project is a double curved, one-side-open structure with a length of 7 m, a width of 5 m and a height of 2.6 m. The wooden lightweight design is made of 30 single-curved elements which were  prefabricated by the students in the workshop of the Faculty of  Architecture in Innsbruck from 36 square meter 6.5 mm thick plywood. In Vorarlberg, the elements were bent and assembled within a week by using about 1500 bolts.

Viewed from outside the pavilion looks like an organic sculpture that appears a little bit similar to the skeleton of a sea urchin. Inside, the structure forms a room with 30 circular openings which provide different views of Alberschwende and the surrounding nature. At night, this effect is reversed by the illumination provided by the interior light that shines through the openings on the immediate surroundings. At the same time viewed  from outside, the structure of the pavilion only appears by round light points and the light shining through then gaps.