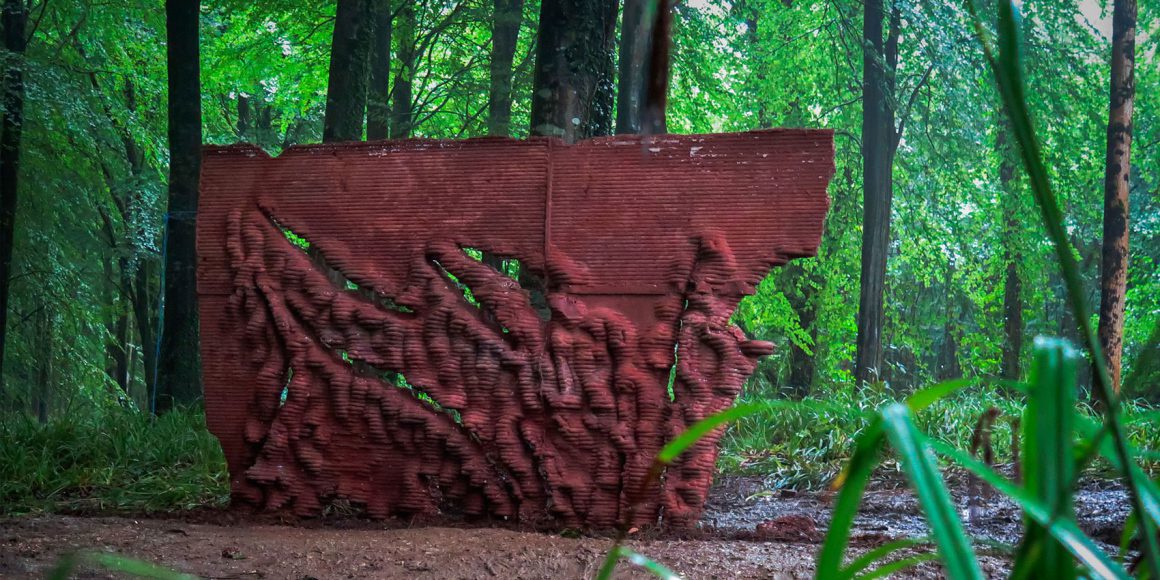 InFlux is the outcome of an exploration on the fabrication and assembly of double-curved complex geometries through the integration of generative design techniques and robotic milling strategies. The research initiated on the material behaviour of concrete in 2014 has been developed in the 2015 cycle by further investigations linking geometry, material, and structure. Realized as a wall with 2.2 meters height, 4 meters width, and a varying depth of 3 – 25 cm, InFlux has been developed, fabricated and assembled in 7 days. 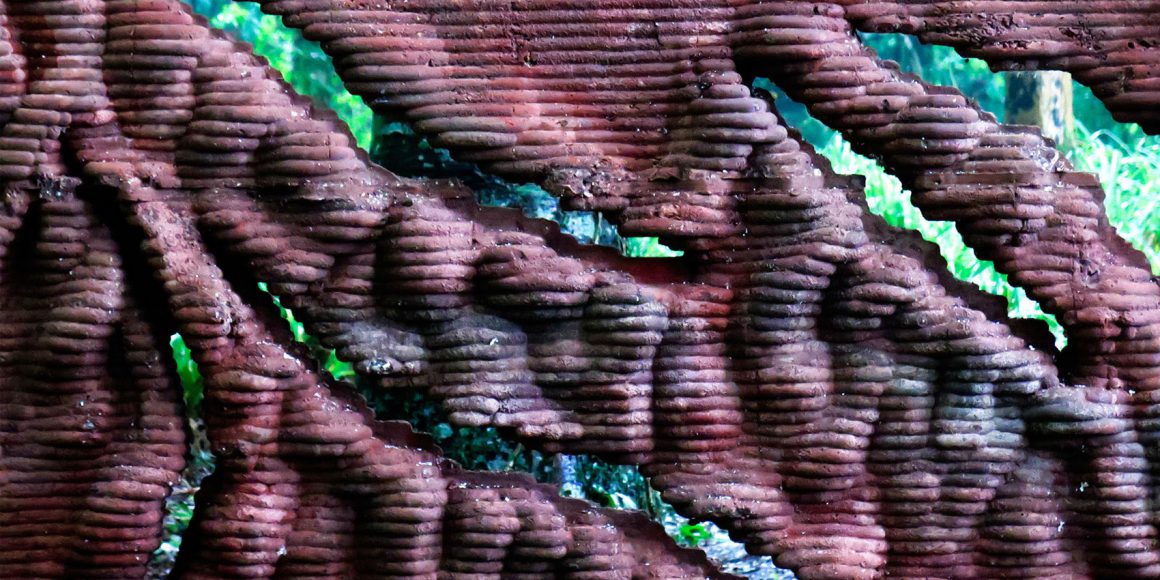 Initial form-finding experiments have focused on the manipulation of a vertical planar geometry towards the creation of varying degrees of curvature through a range of computational techniques. Key parameters in this phase have comprised the distribution of openings and areas of local differentiated curvature values that stem from a global morphology. An agent-based model approach has been adopted for form-finding experiments, whereby a custom tool in Processing has been developed to manipulate mesh geometry locally, based on Z-coordinate data, via mesh relaxation techniques. The goal of the second set of computational experiments has been the integration of structural analysis tools from the outset of design explorations in order to inform global geometry and its structural performance. An initial mesh geometry has been evaluated under its self-weight via FEA analyses with the Grasshopper add-on Karamba as a shell structure, with material properties of high-strength concrete (C90/105). The force flow lines in the output mesh of Karamba have been visualized, with the aim of achieving wall openings which do not interfere with the transfer of loads throughout the global geometry. The FEA stage has been concluded with the creation of a 5 cm. deep shell split by openings following the direction of force flow within the wall. 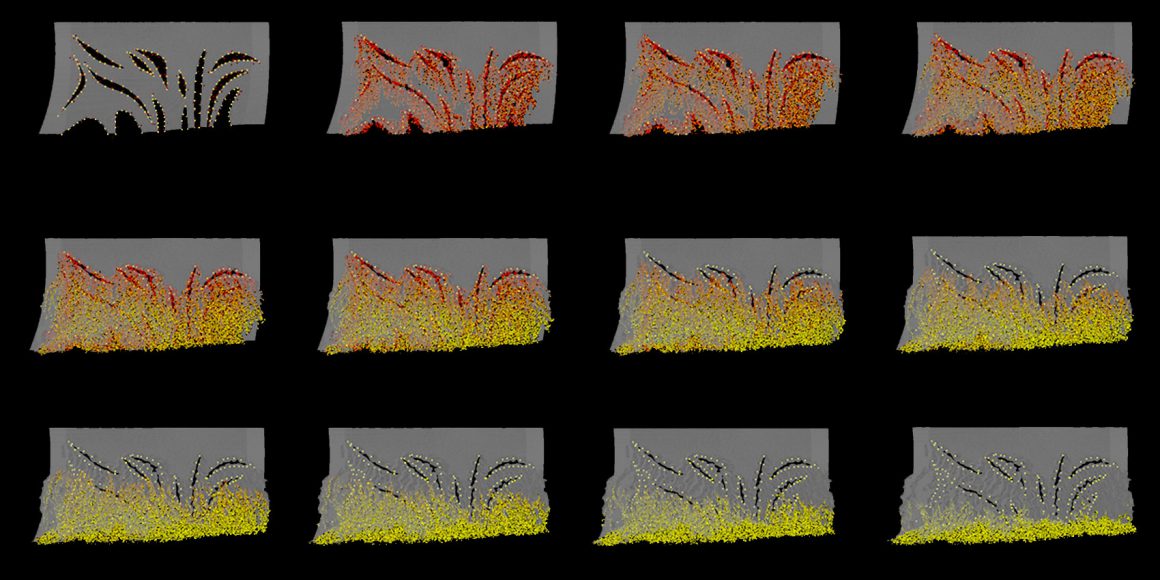 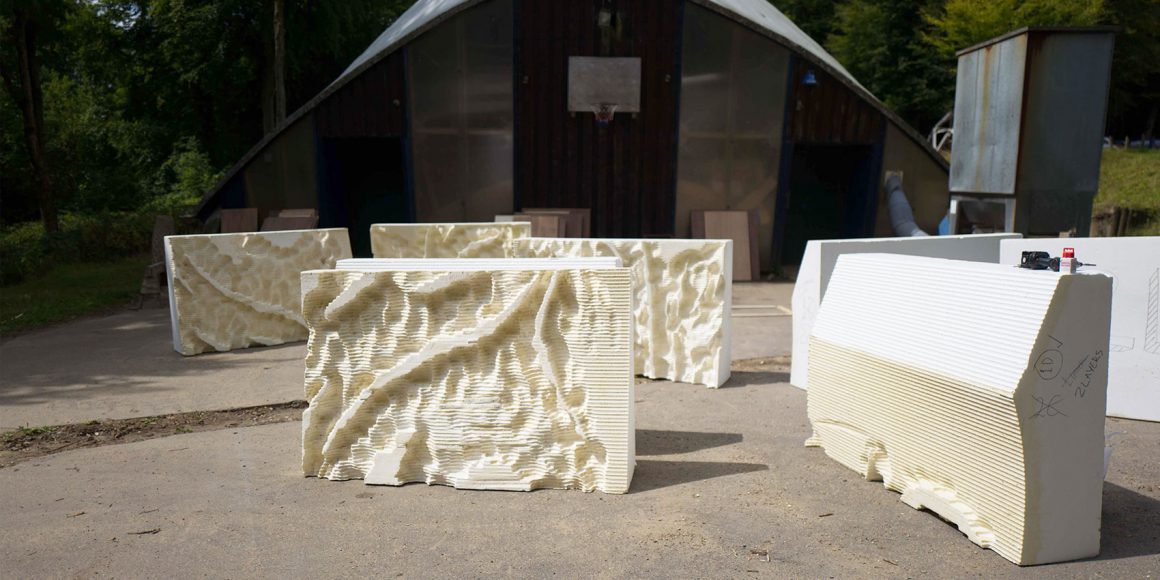 The next stage in the computational design process entails the generation of doubly-curved geometries following the initial shell model as an input. The purpose of this investigation is two-fold, pertaining to structural performance and exploration of robotic milling techniques. The tool in Processing is developed further as a combination of agent-based simulation and mesh relaxation techniques with the purpose of creating a doubly-curved geometrical aggregation that increases in density towards the bottom section of the wall. After the generation of openings, the mesh with its corresponding force flow lines has been imported in Processing for complex curvature generation. The agent system influences local mesh curvature throughout the overall form along the force flow lines following flocking and proximity rules.

Robotic fabrication processes in design allow for moving away from a direct design-to-production approach, whereby the final outcome is predefined and fabrication solely offers a “means to an end”. The tooling path of the robotic arm serves as a direct visual connection between the global geometry and local surface manipulation; therefore, the robotic end effector plays a crucial role as a design tool in the generation of localized surface textures on the global configuration. The material for the form-work has been selected as medium density (30g/l) fire retardant grade expanded polystyrene (EPS) blocks, as EPS offers a suitable compromise between milling time and strength for form-work construction. The dimension of each EPS block is 200 cm in length, 125 cm in height, and 50 cm in depth, resulting with the employment of a total of 8 EPS blocks. The end-effector for the robot serves as a design means that aids in the generation of surface textures in the EPS boards. After the completion of the milling process, the areas of contact between the scaffolding and concrete have been treated with a mixture of silicone and mold releasing agent in order to assist with the de-molding process. It is important to note that the structure is made of a special concrete mix with fiberglass additives which has enabled it to be cast, dried and held strongly in place in a period of several hours without being limited by the constraints of applying conventional reinforcing systems such as rebar. The only location where rebar has been used in the final fabrication has been along the foundation of the wall, bearing a depth of 30 cm. The final assembly stages have involved the casting of fast-setting concrete in the EPS form-work, followed by the curing time of approximately 12 hours. With dimensions of 2.2 meters height, 4 meters width, and a varying depth of 30 – 250 mm, the final wall assembly has been developed, fabricated, and assembled in 7 days.

Throughout the design, fabrication, and assembly processes, the interactive associations between different simulation software have been a key driver in recognizing the ways of integrating architectural criteria with the structural performance of the pavilion. Overall, the research aims to illustrate the architectural possibilities of using concrete in a non-conventional way with limited resources and period of time by creating strong associations between computational design methodologies and digital fabrication processes. ComStruct Tehran UWE DDRU Pavilion 2016
We use cookies to ensure that we give you the best experience on our website. If you continue to use this site we will assume that you are happy with it.OkPrivacy policy