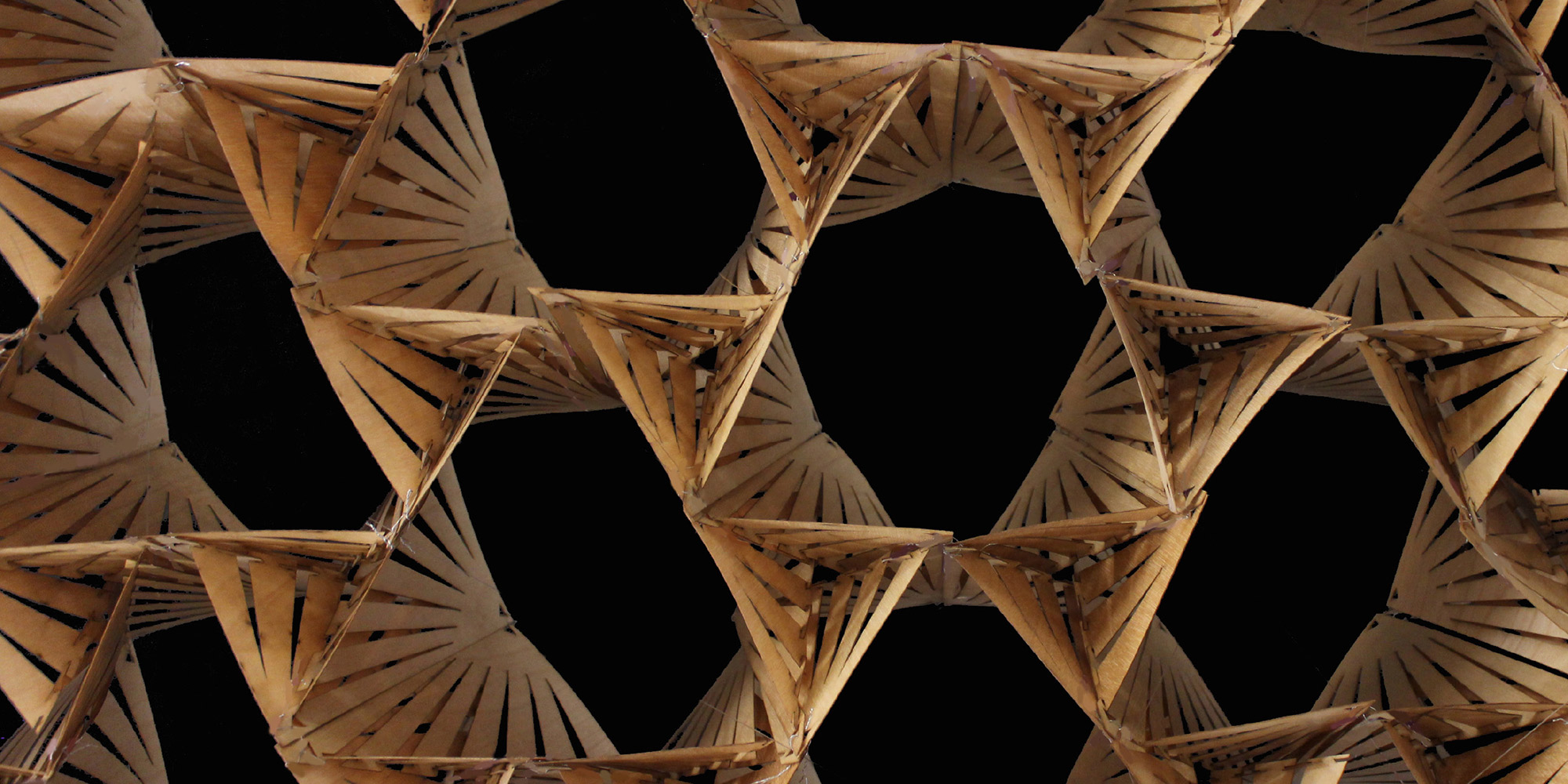 Students Timothy Li & James Wang of University of Sydney recently won the Australian Institute of Architects – Architectural Technologies Award for their project titled ‘Generative Components’. Karamba was heavily relied upon to analyze the structural integrity of the design.

Normality of timber and concrete use in structural systems has given rise to architecture that is repetitive. Conventional use of concrete columns either requires full in-situ casting, or full pre-casting in factories. In addition, in-situ casting lengthens construction time due to one-off formwork assembly. Similarly, conventional use of timber structures often rely on pre-fabrication, demanding precise factory – site coordination. Standardisation of size, also restricts how timber is applied and presented. Together, conventional building materials through digital fabrication techniques afford designers a wealth of structural variety and production opportunities, leading to unprecedented building designs. 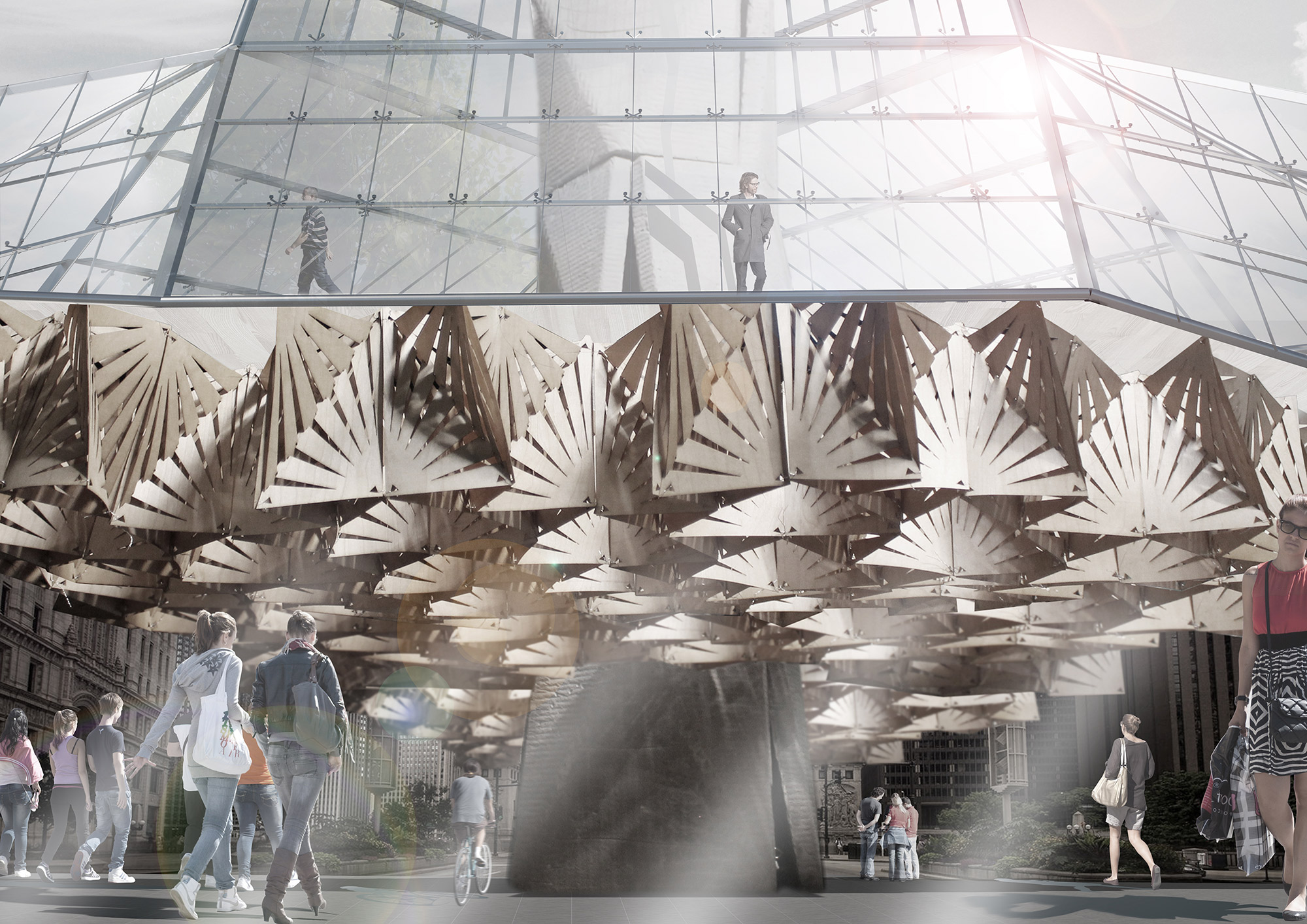 Drawing on research into tensegrity, form explorations and material experimentations, we framed our critique of conventional structures through the design of an Australian consulate-general in Indonesia. We developed a framework for how a simple 3-strut-tensegrity module can constitute timber and concrete, materials readily available near the site. Two adaptable components were provoked: 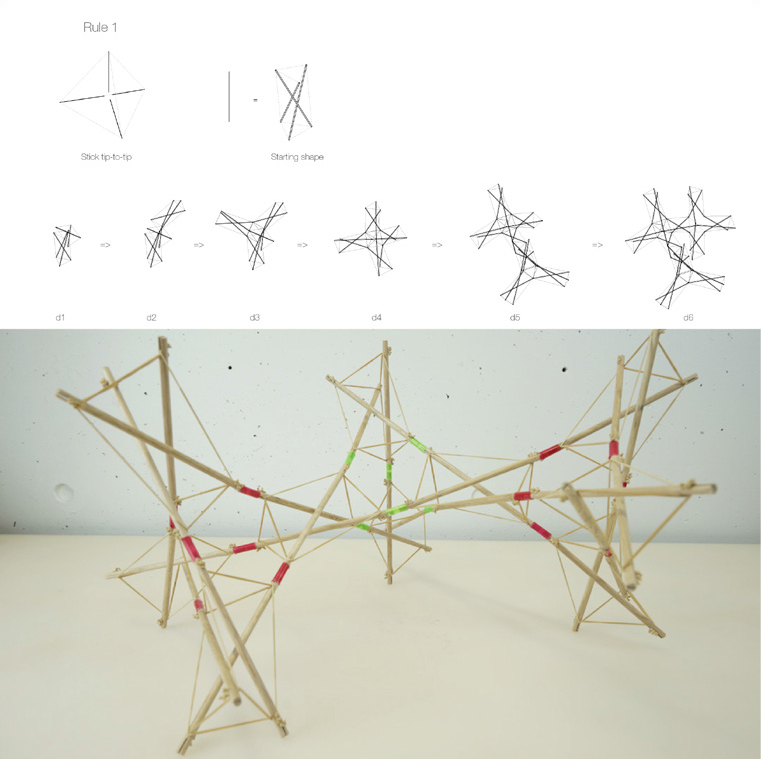 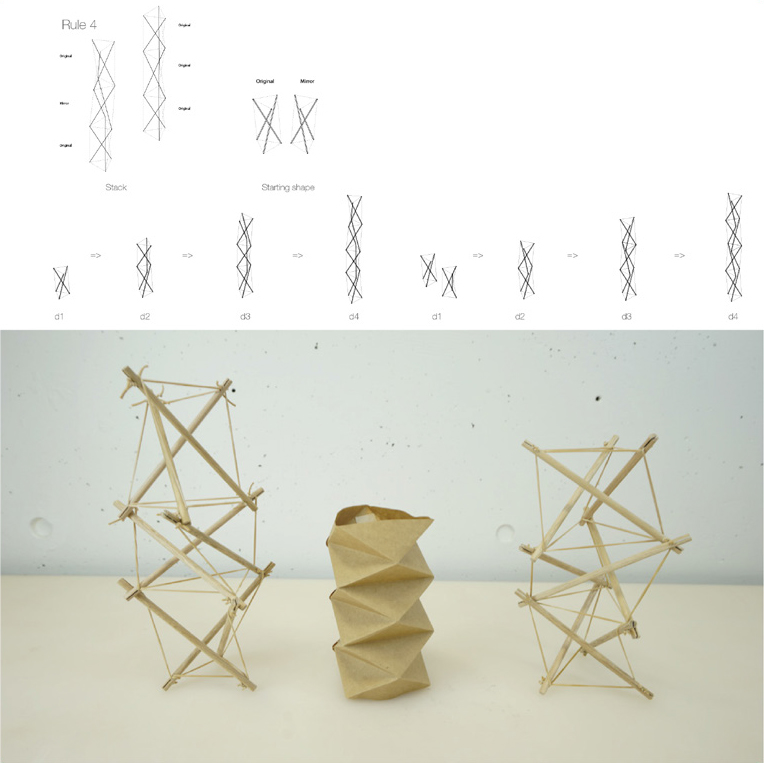 Simply by applying different meanings to lines, a variety of structural systems can be seen through a triangular prism. Where solid lines represent compression, and dotted lines; tension, a series of modules can be iterated on paper, tensegrity was chosen to pursue further explorations with.

A series of experiments were conducted with timber dowels, rubber bands, and plastic joints, by applying different compositional rules to the tensegrity module, as a triangular prism has a large axis of symmetry, there were many possible compositional outcomes that created towers, domes, and walls.

The steel rods and fishing wire model gave a conceptual representation of a possible architectural form generated from playing with timber dowels and rubber bands. The image was then overplayed by a hand sketch showing a possible inhabitation of the conceptual building form. 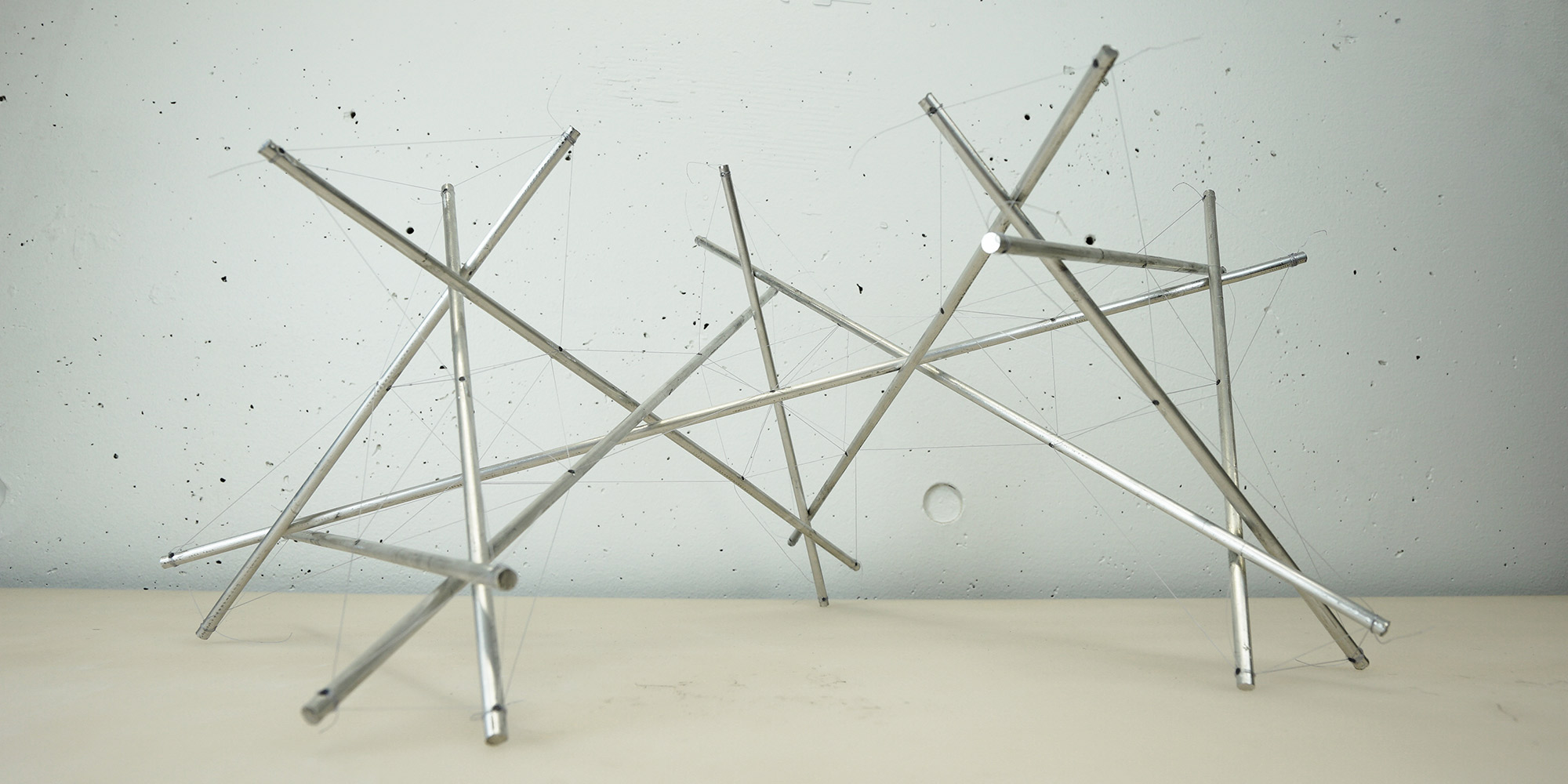 Materials could also be applied to this endless set, where steel rods and steel wire could create a module that is rigid, and applying timber and elastic chord could create a flexible module. The combination of these two ideas resulted in a set of 12 modules that have both shape and material, categorised by lines, surfaces, and solids. A further 2 modules were focused on to prototype at a 1:2 scale, with conventional building materials. 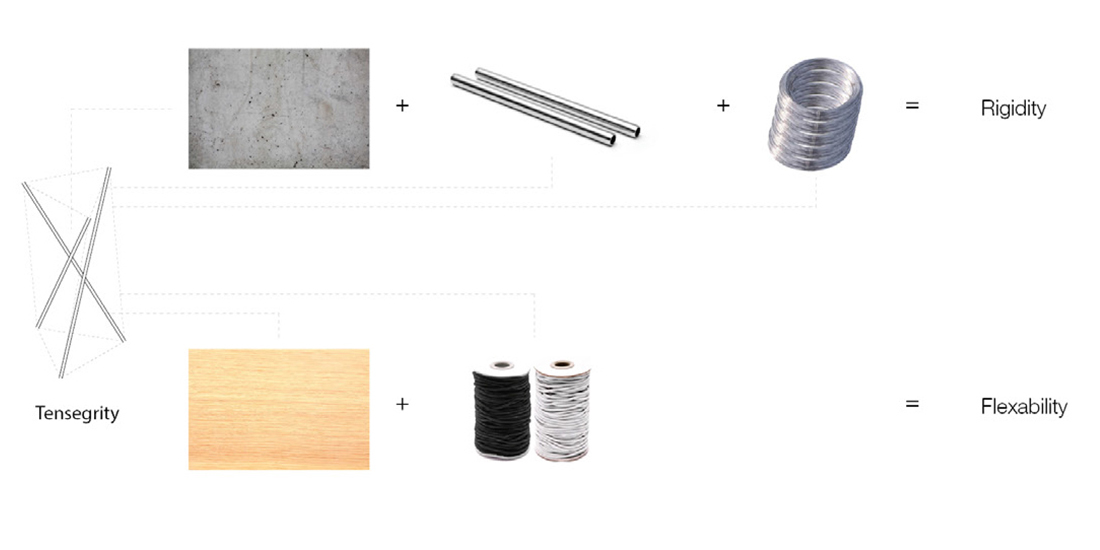 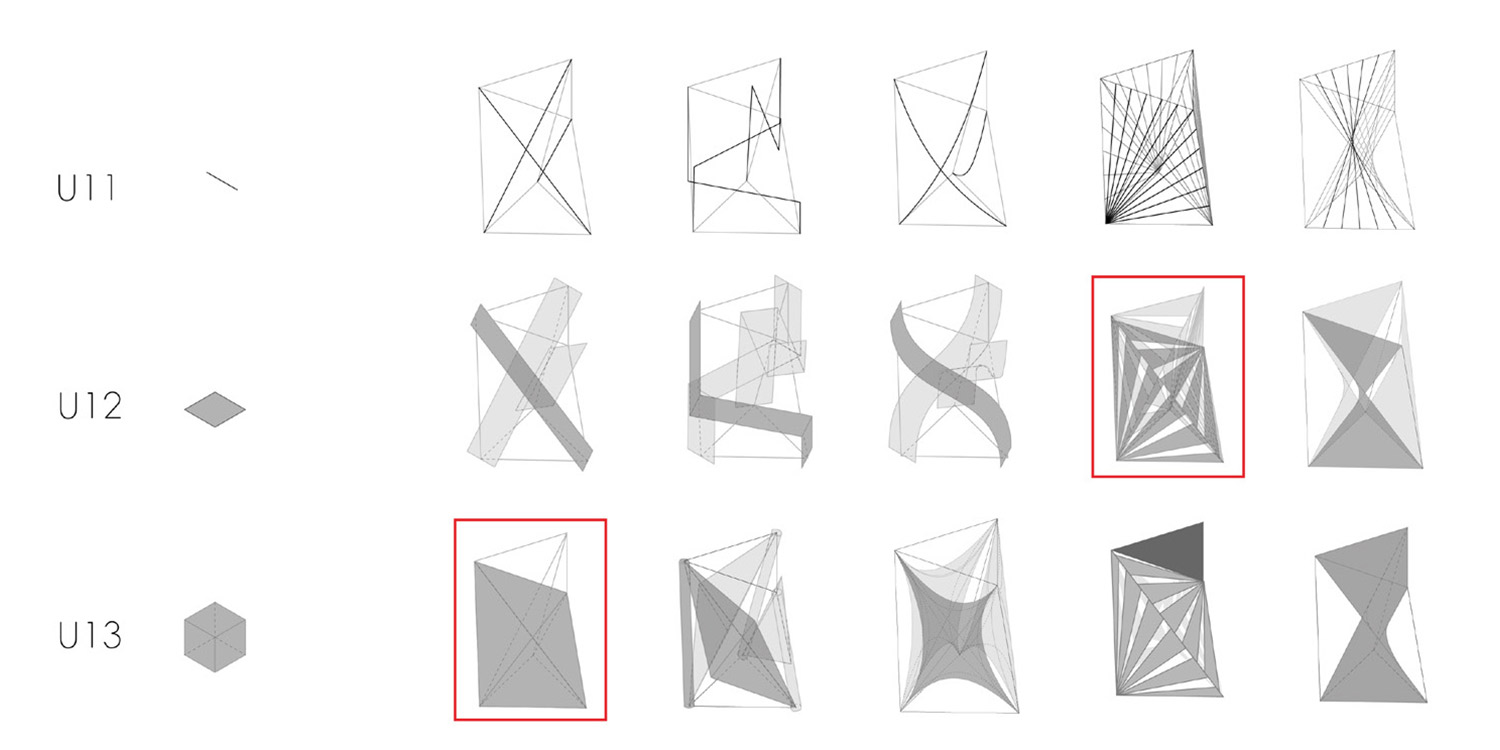 Karamba was then used to refine the form, by revealing weak points in the prototype, particular points of high compression were adjusted for the fabrication process. These two forms were the final outputs of Karamba analysis, two columns were designed by applying composition rules that were explored early on in the process with timber dowel and rubber bands. On the left is a column made from concrete, steel rods, and steel tension wire on the inside, and on the right, a timber column that could be flat packed. 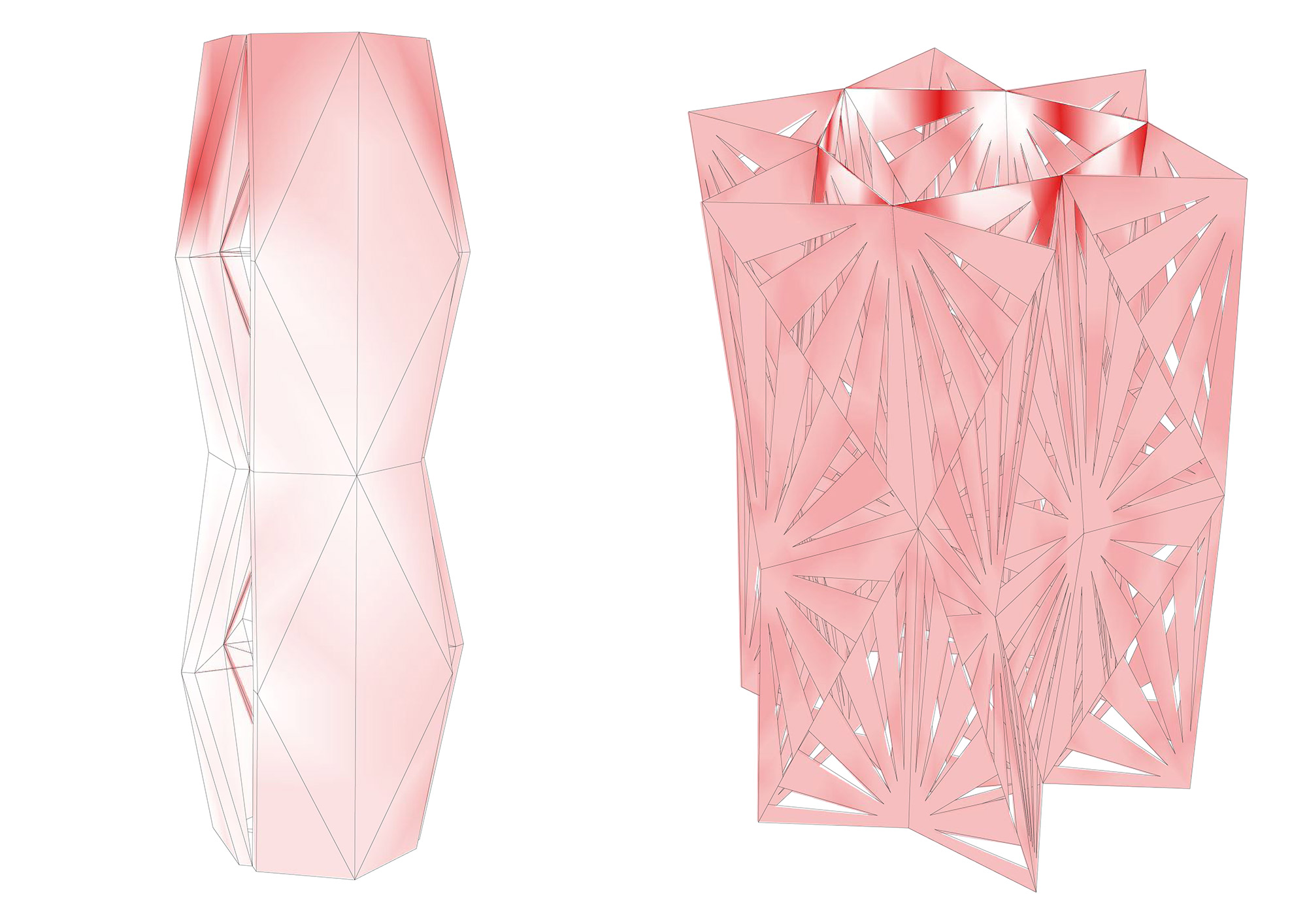 The timber column was envisioned as a flat pack system, the column was laser cut from sheets  of 1.5mm birch wood, along with nuts and bolts at the joints. The column utilises the finger joints as its structural system, as this column is based on the shape of a triangular prism, it can combine infinitely both horizontally and vertically.

This structural column has further applications as a floor system by expanding the module in a horizontal axis, similarly it can be used as a shading device system by stacking the timber modules in a vertical axis. 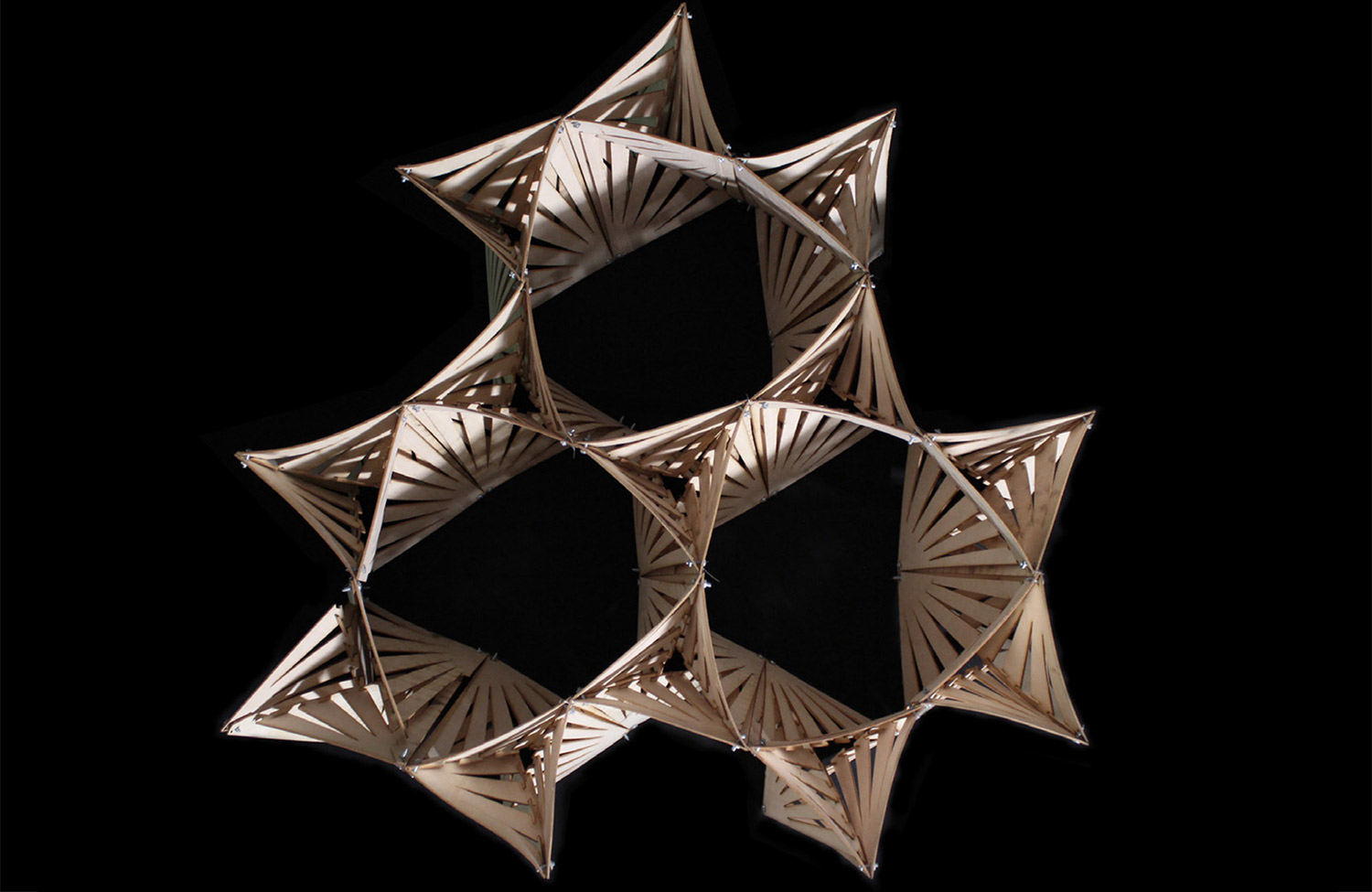 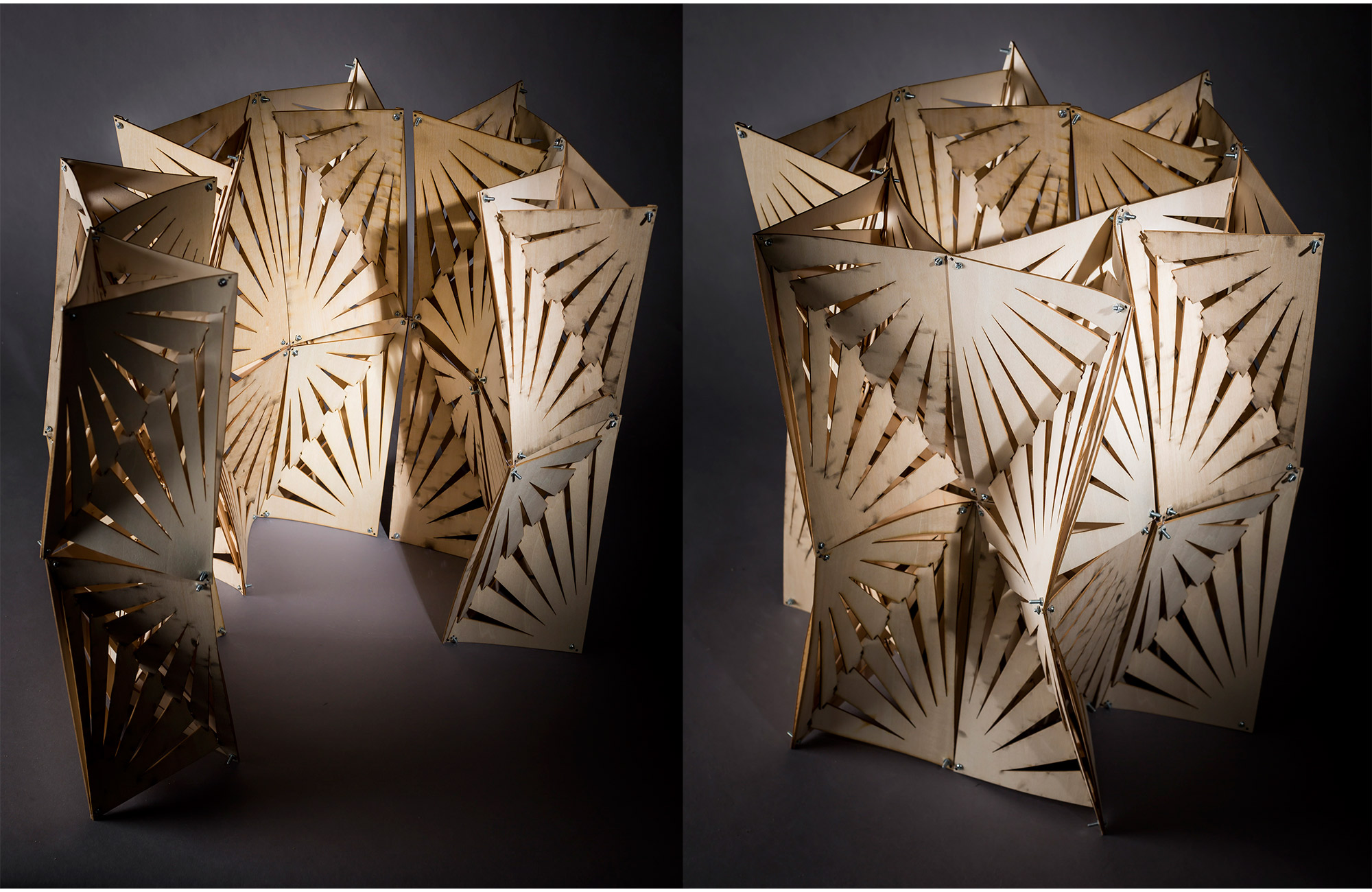 The concrete column was made through CNC milling of a 2-part mold in high density foam. This system challenges cast in-situ columns, by exploring the possibility of partial pre-fabrication of the concrete panels before assembly on site. The tensegrity system inside the column forces the concrete panels into compression and binds the entire column together. Surprisingly only 5kg of the inner structure holds together 60kg of the outer concrete panels.

By unfolding the concrete column, this system can be applied to a bridge, and by scaling the column up, it is able to function as a building core. 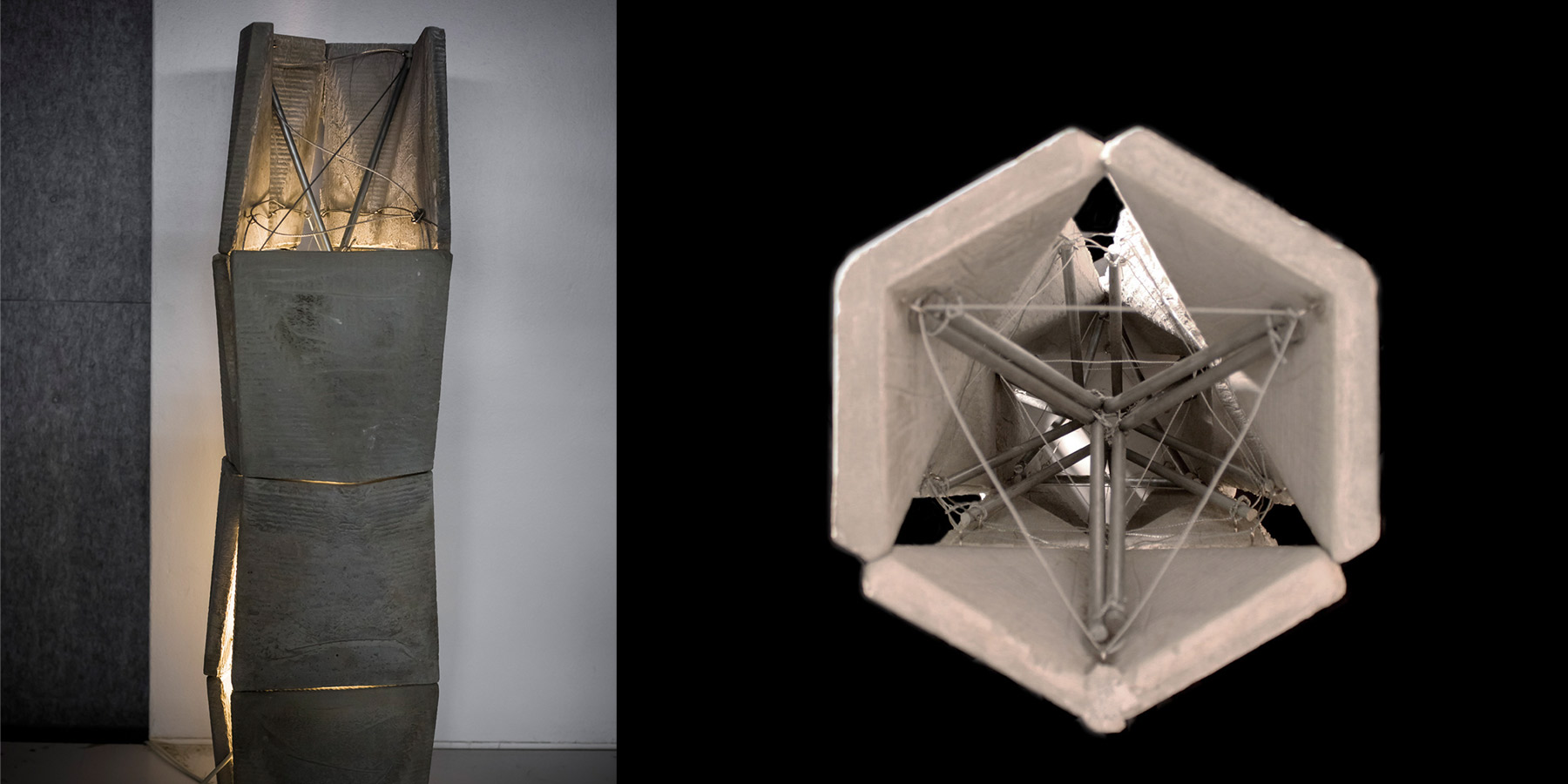 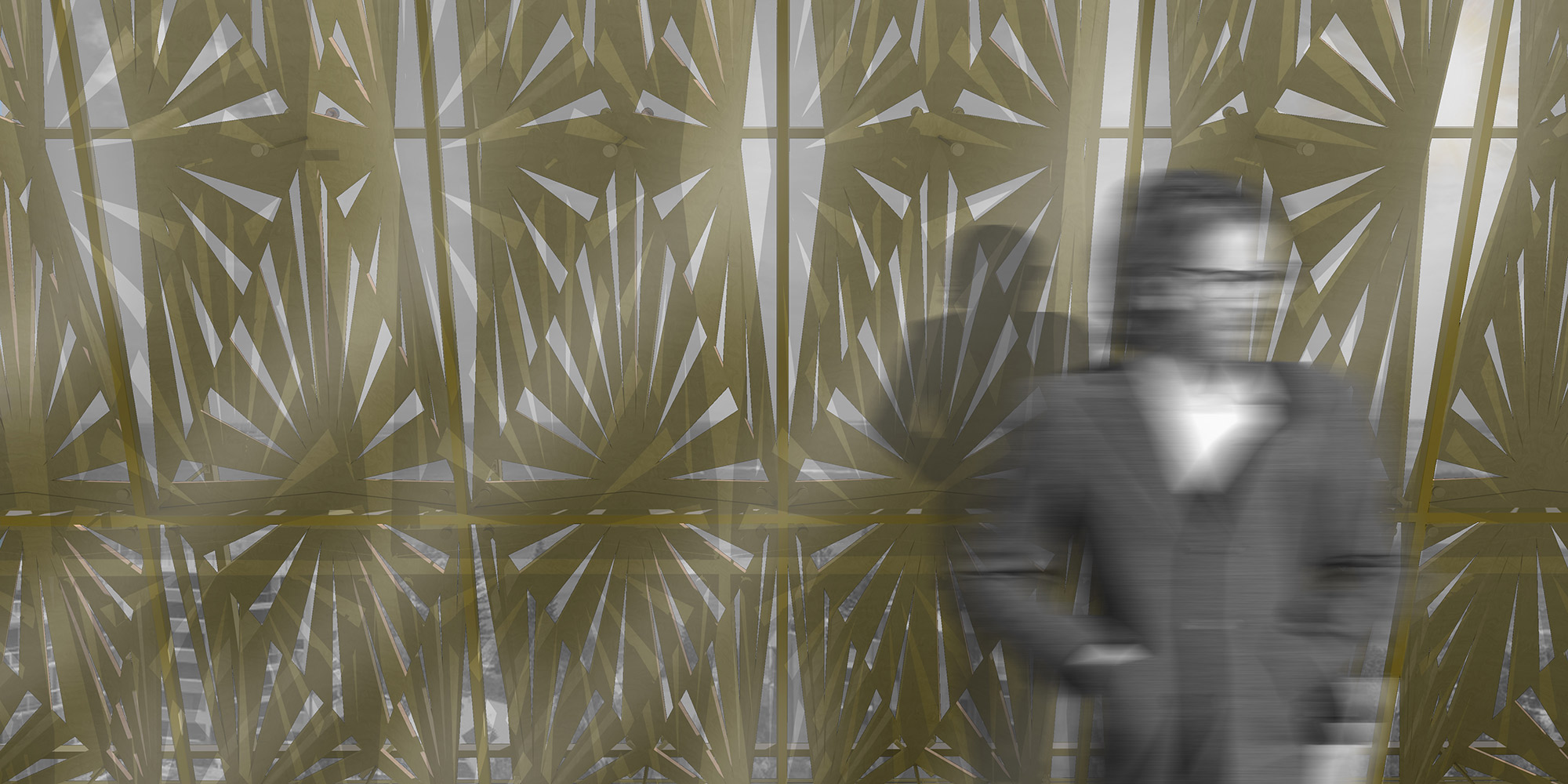 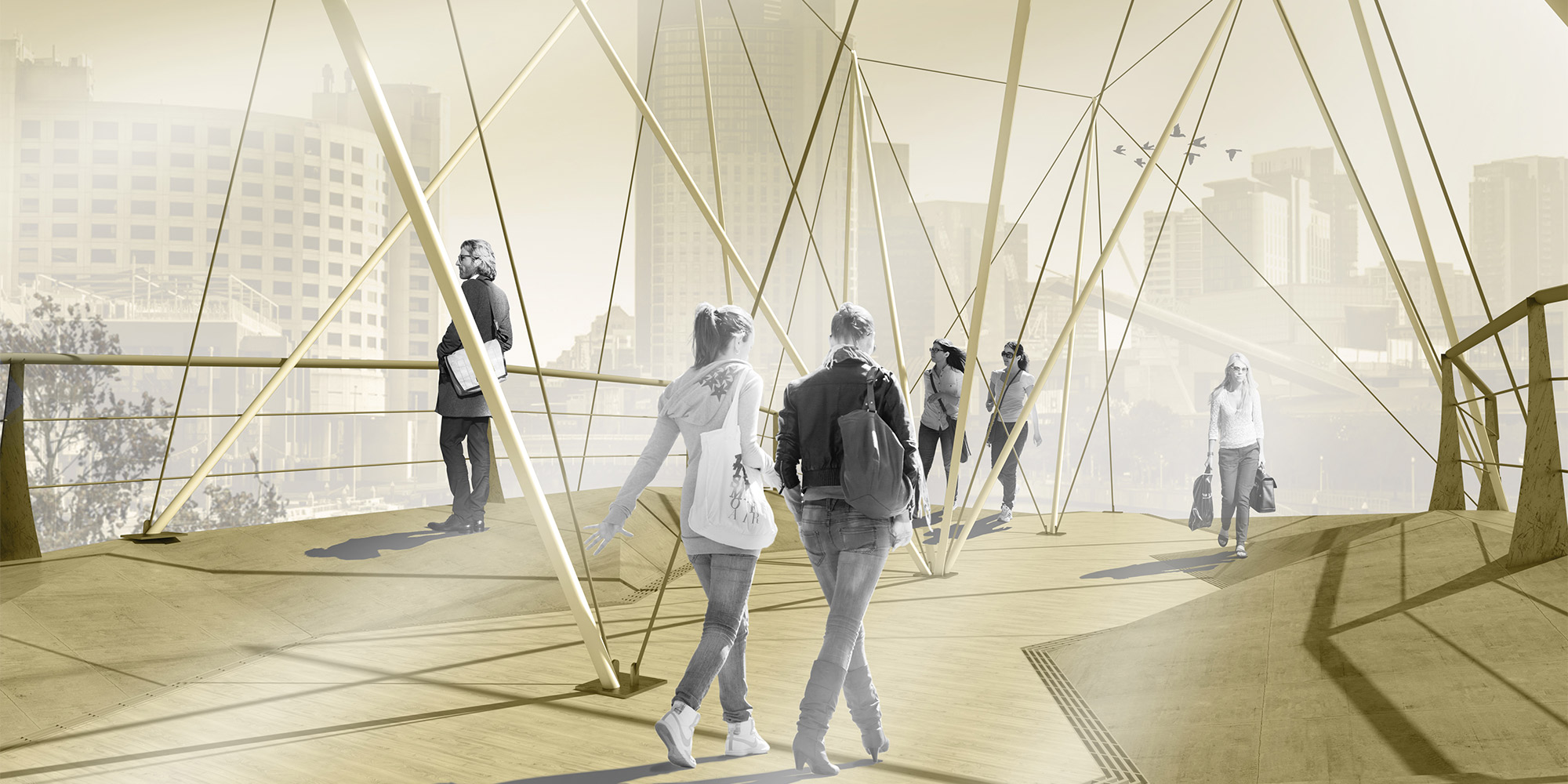 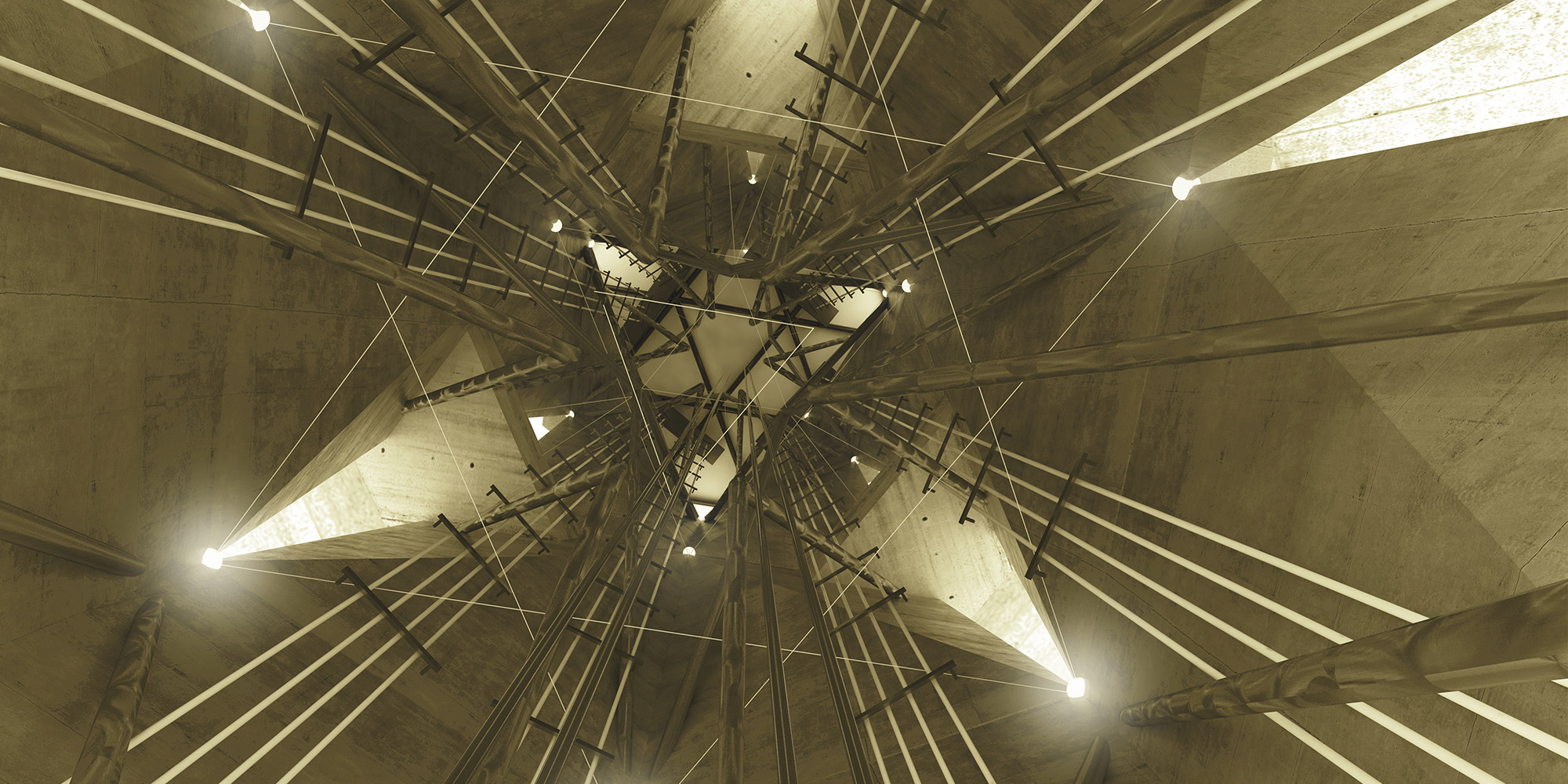 Frac Shell Photoptosis
We use cookies to ensure that we give you the best experience on our website. If you continue to use this site we will assume that you are happy with it.OkPrivacy policy