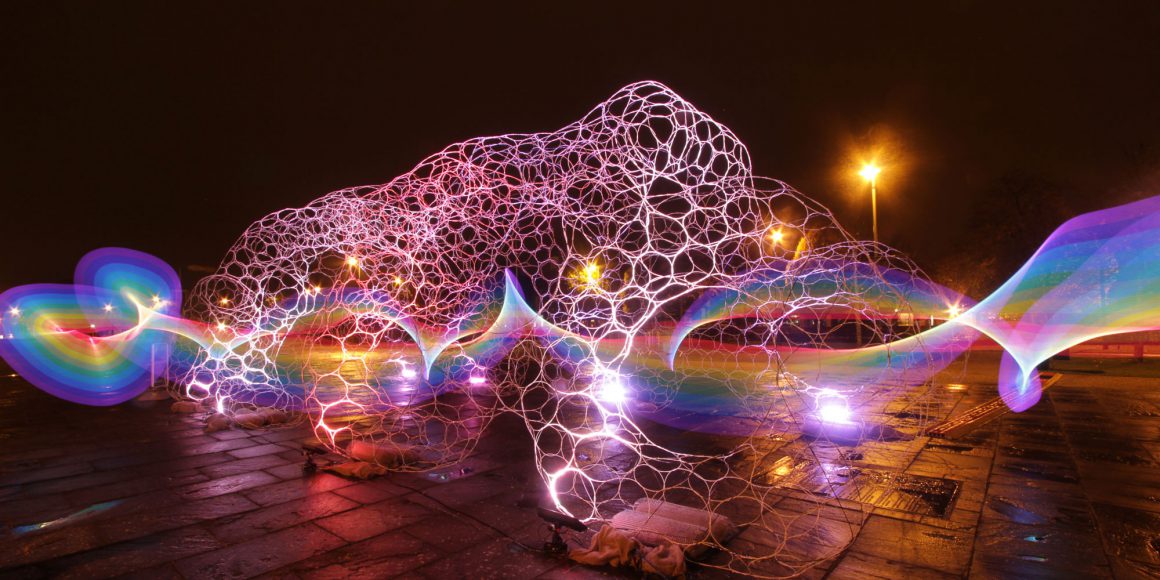 The structure took the form of an arched tunnel (4.3 m tall by 5.5 m wide) and was modelled using karamba’s new second order analysis module. This enabled the design team to determine the maximum allowable wind speed that the structure could resist before buckling would occur.

The Archilace process begins with a triangulated three dimensional surface, optimised such that its dual gives a hex-dominant mesh. Each mesh face represents one of the rings which are formed by bending straight lengths of 3.0 mm diameter glass fibre reinforced polymer. Each ring is woven into its neighbours and held in a closed position with a brass sleeve. The halfedge mesh data structure provided by the Grasshopper plugin Plankton is used to perform the necessary topological operations and queries to generate the final ring network. Because the rings are only interwoven and not physically fixed to each other some slippage and internal movement occurs under load before assuming a stiff, interlocked form. It is very difficult to model this behaviour accurately however it was possible to determine an approximate stiffness by carrying out several physical tests.

A karamba model was set up to simulate the behaviour of the physical tests and determine a value for stiffness that took the internal slippage and movement into account. The analytical model was calibrated by adjusting the Young’s Modulus, using the deflection of the physical model as a target.

To increase the overall stiffness of the structure, 4.0 mm diameter carbon fibre rods are weaved throughout the ring network. Again, the underlying mesh data structure is used to generate lacing patterns for the reinforcement following a simple set of topological rules. During the design of the installation it was possible to quickly insert chosen reinforcement lacing patterns into the karamba model for realtime analysis of the possible configurations.

The reinforcement laces are bending-active elements which, due to their curvature, apply a pre-stressing force on the ring network. By analysing the local curvature of an individual lace at intervals along its length a series of local bending moments can be derived that have the combined effect of straightening the curve. These moments are applied where the reinforcement touches the rings. Karamba’s large deformation solver has been used to validate this method by showing how a curved element becomes straight when these bending moments are applied. Different reinforcement lacing patterns were tested in collaboration with the artists. The final design combines aesthetic considerations and structural efficiency.

The design was analysed in karamba for wind load and self-weight. All previous tests had showed that the failure mode would be local buckling rather than a single element reaching its stress capacity. Using karamba’s second order analysis module a critical buckling load was found for the applied loads. The final structure was designed for a wind speed of 13.9 m/s (50.0 km/h).

The installation was exhibited in Letchworth Garden City for 10 days in October 2014. A similar structure will be exhibited at the Amsterdam Light Festival for the period of 27 November to 18 January, building upon the techniques, methods and lessons learnt on the Letchworth installation.