Development of a continuous derivative structure by applying multi-objective evolutionary algorithms, implementation an algorithm for the polygonization of surfaces, and development of a biomimetic wood-composite panel.

The mollusk shells are composed of calcium carbonate crystals sandwiched in a viscoelastic protein matrix. The shell of the Strombus Gigas has an internal structure composed of three laminar layers that crisscross giving it a much higher mechanical resistance than inorganic calcium carbonate. Inspired by this, a continuous derivative structure is created through the application of multiobjective algorithms. Later, through the application of a k-means algorithm, this surface is discretized into polygonal flat surfaces. And lastly a biomimetic wood based panel is manufactured and structurally tested. 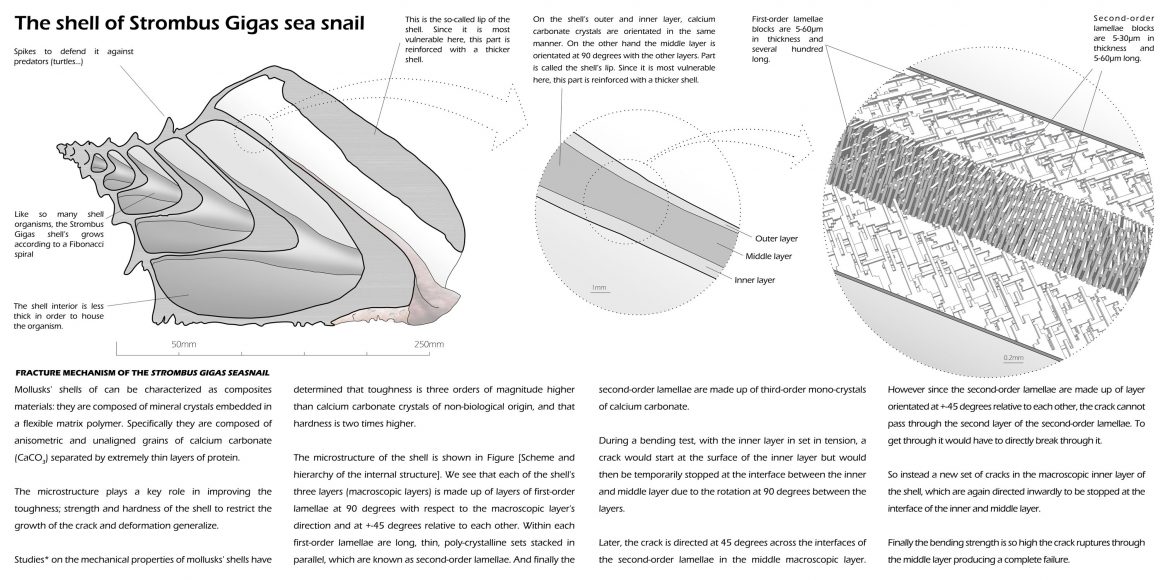 The project consists in the creation a lightweight structure with the form of a continuous derivative surface that protects against the sun. For convenience it was decided to place it in the college campus of the University of Alicante.

For this reason, an environmental analysis of the campus was calculated [not shown here] in order to identify favorable areas for implementation as well as areas to avoid. Specifically, the inside courtyard of the MUA (Museum of the University of Alicante) was identified as an ideal place, given the harsh sunlight inside, the lack of wind, and its centrality in the courtyard.

After determining the location, its conditions and the program, a method was designed for the formal calculation of continuous derivative structures by combining an evolutionary algorithm with a finite element calculation. This process would yield a one-variable solution, which was set to minimize the deflection. However, since we also wanted to minimize the radiation under the structure, the requirement to optimize two simultaneous variables in the algorithm was introduced. Solutions to the simultaneous optimization of a two variable system lay in the Pareto Front and in-between them there is an optimum called Pareto Optimal. It is from here that the structure used in the project was obtained.

As a material for the structure it was decided to create one inspired by the shell of Strombus Gigas, a sea snail also known as the Queen Conch. Its shell is formed by three layers whose internal structure is oriented at +-90 degrees with respect to each other. This helps the shell absorb a large load by not breaking in a fragile and sudden manner, but instead breaking ductility.

Given the difficulties associated with a continuous derivative structure, mainly its simultaneous curvature in two directions which complicates its fabrication and construction, it was decided to build the structure consisting of a set of planar polygons.

Subsequently, all the theory related to meshes, their types, properties, discretization in flat surfaces, and their relationship between curvature and discretization was explored. This was necessary in order to create a discretization algorithm.

Since it was not possible to find a valid discretization of the surface in a single step, it was deemed more effective to discretize the surface by performing a series of steps, each one increasingly approaching an acceptable solution. Hence it was necessary to write an algorithm. Moreover, the advantage of this approach is that once the algorithm was written, it could be applied effortlessly to many other surfaces.

Finally, a biomimetic wood-based panel was developed with the intent of reproducing the structural behavior of the shell of Strombus Gigas. Once completed its structural behavior was characterize through a three-point bending test. Illustrates how the samples and considerations were made for this purpose. The results showed that for one of the tested specimens, the load curve resembled the elongation / deformation few specimens of Strombus Gigas conch curve.